Hey everyone. David here! I’ve been making games with Eli back since The Company of Myself but this is my first blog post! I wanted to show everyone some weird instruments I’ve been making for Antibody, one of the 3 games included in Observatory: A VR Variety Pack. Before we jump right into the instruments, first we need to start with why I’m even doing this in the first place.

In Antibody, you are a microscopic scout ship in enemy territory. It’s dark. It’s gloomy. It’s claustrophobic. The enemies are spooky and overpowering, so you need to be sneaky and light on your feet.

With any game, when I’m figuring out the approach it starts with “how do we want the player to feel?” With Hamster-Slide it’s a pure fun, ‘summer vacation at the theme park’ vibe from end to end. With Antibody, it’s the exact opposite. You should feel confused, out of place, anxious and generally uncomfortable. You are in hostile territory and no one really knows what’s going on, we want there to be a feeling of dread going on. We want Antibody to feel like a horror game without relying on choreographed jump-scares. One of the ways we’re going to accomplish that is by having false-positives: shadows that look like enemies, sounds in the ambiance that sound like bad guys creeping up on you.

Another important distinction is this is being made for virtual reality! There will be exceptions, but generally I want every sound to be coming from somewhere in the game space. This means instead of a flat ambiance layer, sounds will be coming from all around you. This is super vital to a good VR experience. Immersion is the name of the game and audio spacialization is more important than ever.

Ok, less design philosophy, let’s talk sounds. To make sound effects you’ve basically got three ways of going. Synthesis (sounds come from nothing but programming), sample libraries (stuff myself and other people have recorded in the past), and recording fresh material (“foley”). In most cases, all three methods are used together (and edited heavily), but I’ve been trying to become much less dependent on using other sample libraries and to get as close to the source as possible so I have more control. A huge thing in game audio to overcome is repetition, and by having the physical instrument that makes the sounds, even if you try to play it exactly the same you’ll get a different recording. This allows me to get way more variation with way less work. Just as importantly, I’m having a lot of fun doing it, and learning new things which is a fundamental part of how we do things over here. Finally, it’s super cheap. I’m a bit of a packrat and I’ve never thrown away anything related to a musical instrument so there are plenty of parts to frankenstein together. 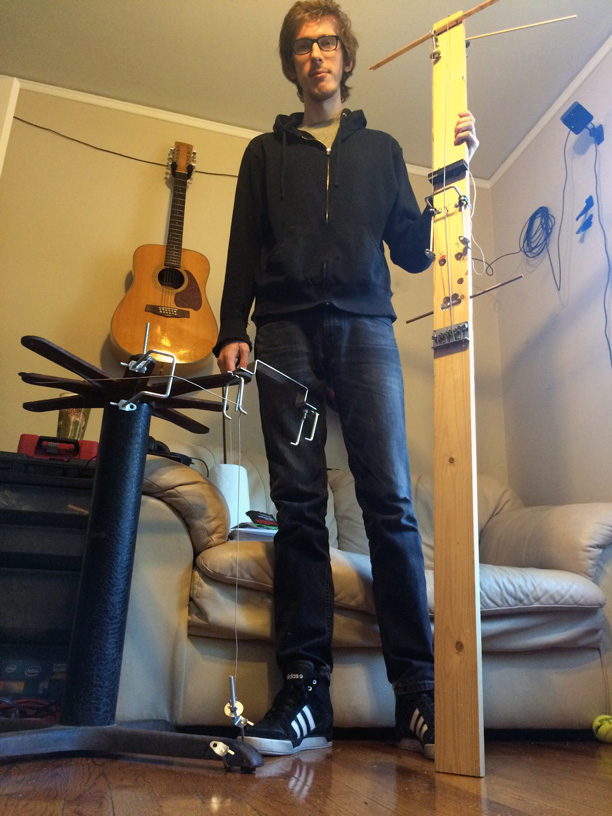 So far I’ve started two instruments that will be modified and ‘finished’ over time. They need better names, but for now I’m calling them Tableguitar (left), and Spaceguitar (right). If you missed the video at the top, here they are in action! 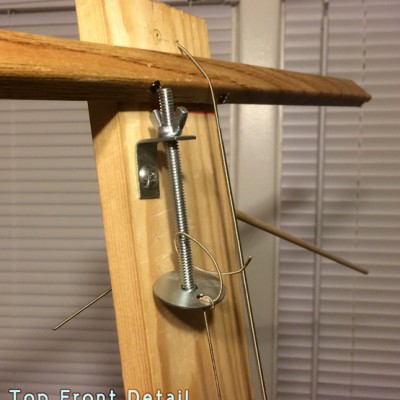 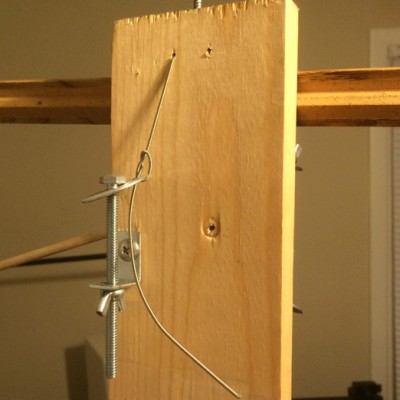 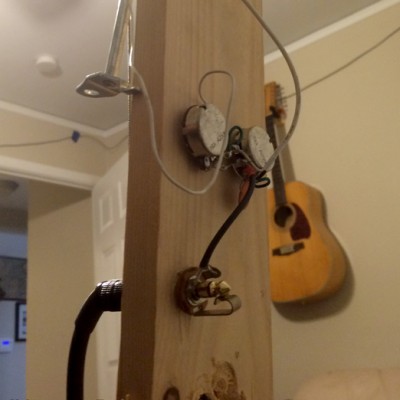 My first attempt was Spaceguitar, which is a bass of sorts. It’s made of a 2×4 I found in the basement, 1/4 of a broken picture frame, and parts from an old disassembled bass guitar I never got around to rebuilding. When making this I knew I wanted a weird atonal bass to use for some creature sounds and some background ambiance of uneasy rumbling for the enemy cells, but I hadn’t considered how ‘woody’ it would end up sounding from the 2×4.

I was really worried about how to make tuning pegs, but a quick google search showed a bunch of super cheap methods. First, I tried using a dowel rod where I’d just twist the string around it, which worked when I was using a violin string but not for the bass strings. I needed a stronger option and found it with a quick trip to the hardware store to grab washers, bolts, nuts, and some small support braces.

Instead of a fixed bridge, I used a hanger piece so it can be wobbled on a pivot for changing pitch. The ends of the hanger can latch onto the edge of the wood body to lock the bridge in place, which is really handy.

Pickup + Contact Mic Dry (I removed the ground hum from the noisy pickup.)
Run through a guitar amp/reverbs/delays. Still some work to be done here.

TABLEGUITARRRR! I’m lovin this thing. I went to Goodwill looking for another large body to use the rest of these bass strings on and found this metal table with the top missing. It’s made of three big metal piece bolted together, the middle of them being a hollow metal resonating chamber which is a perfect analogue for the player being stuck in this tiny steel ship. For these recordings I used a contact mic at the bottom of the table so the sound would have to vibrate through the whole thing before getting to microphone, which kind of gives it a distant ghostly character.

I’ve got a feeling this will turn into some kind of spiderweb of strings and dangly bits by the time it’s finished. Right now it’s a bass string winding around the outside with two bridges attached, one of which can be shifted with a lever. If I swing the arm around it can grab the string and be used for more dramatic changes. My small power drill won’t be able to cut through this, so I’m thinking about taking it to a shop to get a hole drilled into it so I can get a mic inside.

A technique I’ve been having success with is not only just bowing/plucking the string, but bowing the bridge directly, or ‘plucking’ the bolts sticking out of the table.

Next up is sampling these as they are, and modifying them to make new sounds! Sometimes these have a game specific purpose, like when a scarydude roars when you aggro it, but a majority of this process will just be collecting samples for general use later on when I get more into the computer workflow and start layering things. If you’re interested in getting your hands on some of these raw sounds just hit me up on twitter (@thedavidcarney) and I’ll let you know when I have everything all recorded and edited.

Have a nice day!