David just finished up all of the music for Fixation.  He made TEN tracks for the game!  There’s a long loop for each of the five gameplay settings and five more (shorter) loops specially made for certain story points.  For comparison, the original game had two songs that switched back and forth every few minutes.

I still don’t know how he does it.  I can’t wait for you guys to hear the rest of the music.  David and Ben have both done such incredibly wonderful work with their parts of this project…I’m ridiculously proud of them for their contributions and immensely thankful that they’ve stuck with me for as long as they have.

The current estimate is that the remaining audio (the sound effects) will be done in about two days.

Oh, also…I just hooked up Google Analytics, and it seems like more people read this blog than I had realized.  Hello, everyone!

We’re also about to start hooking up the actual sound effects, which is ridiculously exciting for me.  Here’s a picture of the sound map for one of the first chapter’s levels.  This defines what footstep noises to use for each surface that people can stand on.  In this image, Pink surfaces are covered in carpeting, Grey is the doors, and Brown is wood. 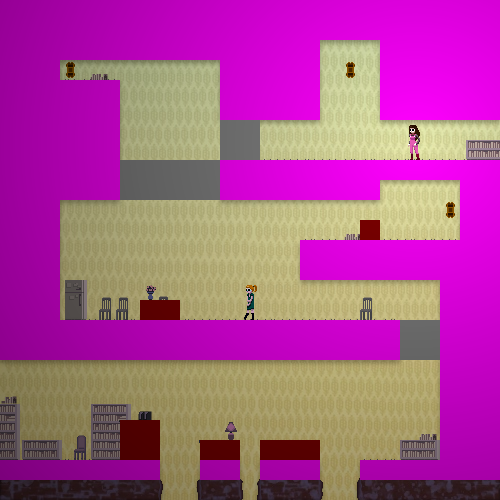