Heyo, I’ve got a few shots of some more world map progress.

First, another update to the swamp zone – everything was looking a little low to the ground, so I added some droopy trees to act as larger landmark-style objects.  The leaves on these trees use an alpha-cutoff shader (“gif-style” transparency, where each pixel of the surface is either fully opaque or fully invisible) which aims to break up their silhouettes a bit, helping them to look less polygonal and more…bushy.

I also enabled FXAA, a fast (and approximate) antialiasing method that’s done entirely as a post-process.  One nice thing about this method is that it treats regular geometric edges and shader-driven alpha-cutoff edges in the same way, meaning these trees can benefit from it.  Lovely!

Next, I started to work on the desert zone – I don’t have any detail objects scattered around in it yet, but I did some work on the map’s main terrain shader so that it could support sandy areas.  There’s some notable influence from Journey’s sand renderer here because let’s be honest – they nailed the sand in that game – they released a paper that described sand as a zillion tiny mirrors that all may or may not be reflecting into the camera.  What an intuitive and accurate way to approach the problem! 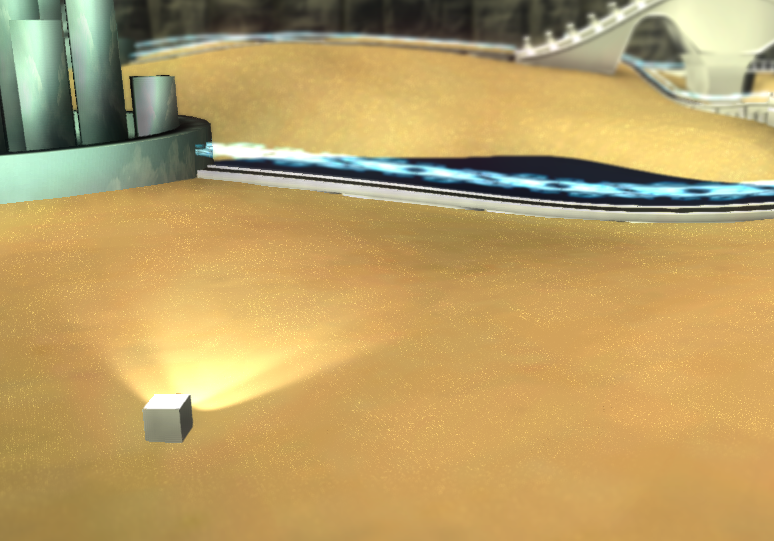 Shaders are all about reacting to light, so here’s another shot of the sand shader at nighttime.

Ooh shiny.  That’s all for now